Leaking Shower Repairs
About a year ago we were asked to provide a property manager with a quote to repair a leaking shower. The shower was in a luxury townhouse in a popular Brisbane inner city suburb.

A Shower Dr tradesperson inspected the shower recess and found a few cracked and loose tiles, some missing grout and failing silicone. Our technician diagnosed the most probable cause of the leak to be a failure of the waterproof membrane possibly due to movement in the building.

It was apparent from the poor condition of the shower that immediate rectification work was required before too much further damage was done.

At that time a full Shower Dr Service would have been sufficient to restore the water integrity of the shower. This would have involved removing the shower screen and setting it aside to be refitted. Stripping all of the grout, silicone and sealants from the shower recess and removing and replacing any cracked or loose tiles. 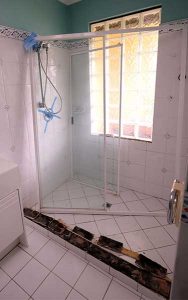 shower was leaking through into the lower level ceiling cavity. We decided that an inspection was appropriate to ensure that the problem was not worse than when we initially quoted.

Unfortunately, in the year that had passed, the damage had become so extensive that shower couldn’t be serviced normally and a complete shower rebuild was necessary. In the intervening time, water had penetrated the base of the shower, the walls and the hob to such an extent that the entire shower recess was now compromised and had to be demolished and rebuilt from scratch. The water damage is clearly visible in the photo to the right.

This meant removing all of the tiles from the walls, breaking up the floor and hob and bringing the room back to its bare bones. We then waterproofed the area and rebuilt the shower entirely, making good walls and floors, retiling, refinishing and grouting the entire area.

Not only did this take a full week to do, inconveniencing the tenant, the cost was more than 5 times the cost of a Shower Dr Shower Service.

Leaking Shower Repairs – when to do them

The moral of the story? Shower and bathroom repairs don’t get better over time, the damage only gets worse and there is a real risk of 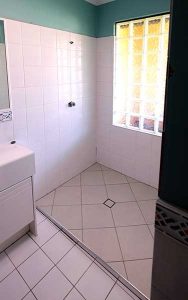 structural damage to the property. It’s bit like a simple toothache that turns into the need for a root canal if not attended to. The image to the right shows the shower almost completed, only some grouting, fittings and shower screen are still to be done.

If you have leaking shower, cracked or loose tiles or even missing grout, don’t wait until it’s too late to fix. Most leaking showers repairs can be carried out in a day with a guaranteed Shower Dr Shower Service. Save time, inconvenience and thousands of dollars by calling The Shower Dr as soon as you notice a problem in your shower. We are QBCC registered builders and we’ll fix it right – first time.

If you have a problem with a shower, if it’s leaking or old The Shower Dr offers a full range of options to suit your budget and your taste.

Call The Shower Dr Sunshine Coast, we can usually repair your shower without removing tiles and reseal it effectively and permanently. We’re quick, neat, reliable, professional and we have more than 25 years experience is repairing showers just like yours.

For all shower repair services on the Sunshine Coast, call the professionals with the experience you need. The Shower Dr – We Repair, Restore and Rebuild showers from Caloundra to Noosa- guaranteed.

Thank you shower doctor for your prompt and efficient service . The shower looks like New. No mess no fuss. I have already recommended you to 3 of my clients.
Regards

What our customers say

Get a Free Quote